At the age of ten 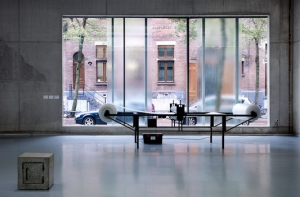 Peter Zegveld visited the legendary exhibition ‘Bewogen Beweging’ (Moving Movement) at the Stedelijk Museum in Amsterdam, which included Swiss artist Jean Tinguely’s Métamatic machines that produced automatic drawings. Zegveld’s first exposure to kinetic art would prove to be a defining moment. His experience would set in motion something that resulted in a rich and energetic career as an artist, theatre maker and performer.

For more than twenty years Zegveld has pursued a unique approach, producing performances that are visual, sensual and filmic. In both his theatrical works and installations Zegveld makes use of the laws of physics: the workings of light, air, sound and gravity. With his unconventional stance he traverses disciplines, allowing the viewer to experience and explore absurdities. In addition to his own productions for theatres, festivals and his artworks, he directs productions for the Orkater theatre company and television series for VPRO. Zegveld is artistic director of the Caspar Rapak Foundation.

Somehow Peter’s practice had escaped my attention (or I’d simply forgotten) and reading about it through the musings of friends and others, it also brought home (no pun intended) the specificities of the Dutch art scene and its institutions in the 1980s and 1990s. Peter’s partner, artist Jacqueline Verhaagen, whom I knew when working at the Rijkskademie (around 1990) approached me in the spring of 2013, asking whether I was interested in translating the texts. Because they were so diverse, it ended up being a great pleasure, sending me down memory lane myself. It also reacquainted me with some wonderful voices in Dutch writing such as Dirk van Weelden’s.