Coinciding with the third conference titled ‘Curating After the Global: Roadmaps for the Present’, organised by a range of partners, including CCS Bard and the LUMA Foundation, the book following the second symposium, How Institutions Think, was released.

Only receiving copies last week, I was surprised by the sheer pleasure of seeing and holding the final product, which this time was designed by Julia. Although I know the book probably better than anyone because I’ve read the texts so many times, feeling the weight and the texture of the cover and the paper, as well taking in the dimensions of the objects was a real surprise. Working with the designers, specifically Valerio di Lucente, was a real treat, as they seem to take such pleasure themselves in dealing with the objects in all their material intricacies. For an interview with Valerio about how it all came together (and a broader and better range of images) see here.

The following quote underlines the connection between the project’s concept, the diversity of content and the various forms, in terms of layout, the texts have been given.

To begin we decided upon an A4 format for the book. It seemed appropriate to start from a standard format used by almost every country in the world – apart from American influenced countries – and in some ways it represents the epitome of an institutionalised sheet of paper. The design expands on the symposium identity, whereby the book is built on a grid displaying different ‘constructs’. The essays’ layout changes throughout book, from one to two columns, from side-notes to footnotes. This variety reinforces the idea of a breadth of positions, rather than fixed conclusions. This design approach also allowed to better represent the tone and typology of the contributions. A longer column for deeper reads, a two-column system for more ‘narrative’ essays, and alternating widths for conversations.

It’s always a pleasure working with designers who work in this way, rather than simply ‘give shape’ to material. Although Valerio claims that Julia don’t design ‘by committee’, working from the content and the concept is by definition collaborative, and thus doesn’t feel hierarchical. 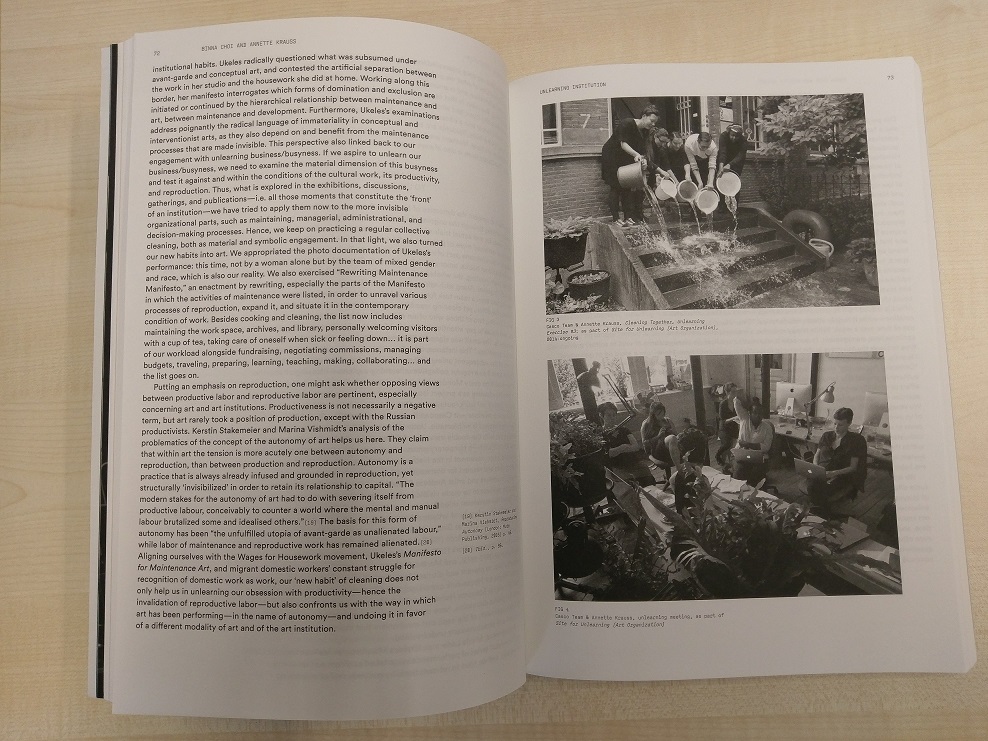 Taking its title from Mary Douglas’s 1986 book, How Institutions Think, the texts in this anthology explore contemporary possibilities and limitations of institutional formats, practices and imaginaries, starting from a different place, namely from categories of knowledge, cognition and the social. Authors were invited to reconsider the practices, habits, models, revisions and rhetoric of institution and anti-institution in contemporary art and curating by considering practice, cognition and social bond, power/knowledge, and institution as an object of enquiry across many disciplines including political theory, organisational science and sociology.

The book will be launched in London in January 2018 at The Showroom. Watch this space… In the meantime you can find it in a bookshop near you, or order it from the publishers MIT.